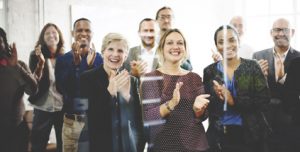 “What do you want to be when you grow up?” was a question you and I and millions of other people were asked as a child. “A fireman! A school teacher! A professional bull rider!” The career opportunities were as endless as the excitement we felt as young dreamers peering into a future that seemed easily within our reach.  And why wouldn’t it be, when our greatest perceived challenge from the posed question was in the choosing of what we wanted to be, not in the thoughts of how to get there. “Should I be the president of the Unites States, or an astronaut? A veterinarian, or a professional basketball player?” It was always so hard to decide.

Eventually though, the realities of life take over and we may easily find ourselves far away from the dreamers we once were, pursuing a degree we have no passion for, or feeling stuck in a career that seems nothing like what we had once hoped for. While our desires, our expectations, and our circumstance may have led us to working at a job that is something far different than what we once wanted, it doesn’t mean we can’t put a plan in place to pursue a career that would at least be fulfilling, if not the one of our childhood dreams.

While you may use your own formula to decide what your dream career might look like, Glassdoor came up with its own model to determine the best jobs in America in 2017. Using three key factors and weighing each category equally, here is the formula: 1) earning potential based on median annual base salary 2) overall job satisfaction rating 3) the number of job openings. The 50 jobs they list stand out in all three of those categories given the number on their Glassdoor Job Score. Each Glassdoor Job Score is based on a 5-point scale (5.0=best job, 1.0=bad job). To have a better understanding of your earning potential, learn how to calculate your take home pay.

Jobs in the technology field were among those in the top 50 of Glassdoor’s report, but careers in accounting and finance, engineering, and the healthcare industry also made the list. From the report were a wide range of occupations that could fit a various range of skills and personality types. Although President of the United States didn’t make the list (neither did bull rider), there were a variety of occupations that would fulfill many childhood aspirations, from a nurse practitioner, intelligence analyst (spy fighter!), to a college professor. The findings indicate that there is job security, good pay and satisfaction within many diverse occupations.

Whether you are in the beginning stages of finding a career path that is right for you, or are currently unhappily employed, research your options in finding an occupation that will bring you satisfaction. While you may be little older and a bit more jaded than when you first gave thought to your future, you are still allowed to dream and to work toward making those dreams your reality.

Are you in a career of your childhood dream? What did you want to be when you “grew up?”

One comment on “Do You Have One of the 50 Best Jobs in America?”